Vítkov native Jan Zajíc, born 3 July 1950 to the family of a pharmacist and teacher, immolated himself on 25 February 1969 in Prague as a protest against the ongoing occupation by Warsaw Pact forces, and also against the victory of the communists in February 1948. 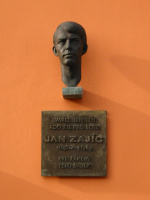 At the time of his death he was a nineteen-year-old student at the secondary industrial railway school in Šumperk. During his studies he took a lively interest in literature and poetry, even writing poetry himself. In his ultimate self-sacrifice, he followed the example of Jan Palach as a living torch, expressing the necessity to tear people from their apathy, defeat and acceptance of inevitable collaboration. After Jan Palach had burnt himself to death, he took part in a hunger strike, ending on the day of Palach’s burial. Approximately one month later, dismayed by the continuing normalisation, and by the fact that Palach’s sacrifice had had no lasting response from society, he resolved to follow Palach’s lead. He set fire to himself in the passageway of house number 39 in the upper part of Prague’s Wencelas Square. It was about half past one in the afternoon and he died on the spot.

Reports of Zajíc’s death made their way to his native Vítkov only in fragments, but they soon gave vent to a general upwelling of feeling. The remains of Jan Zajíc were transferred to Vítkov and the coffin was exhibited in the vestibule of the nine-year elementary school in Opavská Street. Jan’s fellow pupils maintained a vigil of honour beside the coffin and a condolence book was opened for people to pay their respects.

People flocked to pay tribute to Jan’s memory and to express their heartfelt sympathy.

On 2 March 1969, following a march through the town in which several thousand people took part, Jan was buried at the municipal cemetery in Vítkov.

The modern tombstone to mark Jan’s grave was installed after 1989 and is the work of academic sculptor Olbram Zoubek. The sculptor was similarly opposed to the events of 1968 and 1969, and the sacrifices of both young men affected him deeply.

A year after the Velvet Revolution, Vítkov’s main square was christened Jan Zajíc Square. In June 1992, the Jan Zajíc Foundation Prize was inaugurated at the Vítkov 22 Opavská Street Elementary School by the Vítkov Municipal Authority.

The aim of the foundation is to reward – once a year on the occasion of Jan Zajíc’s immolation – the best students and pupils in our region.

The award may be conferred for a heroic act – saving the life of another, exceptional results at work or school, victories and successes in all types of academic or sporting competitions, or for publishing, scientific, artistic and charitable activities. Its award is decided by a management board.

All awards are presented at a concert performance of professional musicians, a reverential memorial to mark the death of Jan Zajíc, and in the presence of important guests. 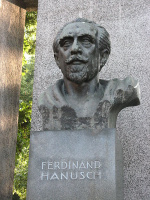 Ferdinand Hanusch was born to a poor family in 1866 in the formerly separate village of Horní Ves, which had yet to be incorporated into the town of Vítkov (then called Wigstadtl). He had to learn a variety of trades in order to feed himself, which he achieved through hard work and perseverance. His first wages were earned as a labourer on the construction of Vítkov’s silk mill. Later he worked at the factory as a weaver. In 1897 he became a member of the Social Democratic Party and a trade union officer. Leaving the town to seek his fortune and being both highly gifted and tenacious, as an autodidact he soon acquired a considerable breadth of knowledge. He worked as a political-trade union secretary in Šternberk, and from 1900 became secretary of the Union of the Association of Textile workers in Vienna. In 1907, following electoral law reform, he became a Social Democratic Deputy to the Parliament, the first of the Austrian “national” deputies in Vienna, the capital of what was then Austria-Hungary. Hanusch was thereby able to propose and submit legislation to achieve social and political benefits for the labouring masses.

From the outset of the first government the Republic of German-Austria in 1918, he served as a government minister until 1920, as secretary of state for social care and affairs.

His legislative initiatives laid the foundations of the modern social state, from entitlement to paid holidays, to social insurance for the employed and the creation of the trade union councils, through to the statutory regulation of working hours. He was instrumental banning night-work for women and young people, and outlawing child labour.

When he and his allies left the Austrian government in 1920 he became director of the Vienna Chamber for Labourers and Employees, and continued in parliament, as Chairman of the Social and Political Committee, to work to improve legislation in the social sphere in Austria until his untimely death in 1923. He is buried in Vienna’s Central Cemetery.

In the book History of the Town of Vítkov, written by Josef Ullrich and published in 1933, Ferdinand Hanusch is described as an important son of the motherland (pp. 547–548), an outstanding social democratic politician and organiser, whose primary lasting achievement was to promulgate social political ideals thanks to which Austria had and continues to enjoy one of the finest social systems.

The memory of Ferdinand Hanusch was honoured by the City of Vienna and the whole of Austria with the erection of a republican monument showcasing the busts of social democratic politicians on Vienna’s Ringstrasse, and in the lexicon of the capital’s street names we also find Hanuschgasse, already named in 1924. Other towns also followed suit, naming their streets in honour of the memory, work and achievements of this great man and politician.