Vítkov was founded together with Vikštejn Castle, probably in the latter half of the 13th century by Vítek of Kravaře. The first written records date back to 1301. In 1523 King Louis II of Hungary granted Vítkov the right to hold an annual fair. The town, including Vikštejn Castle and the surrounding villages passed between various owners, among whom were the Bírkovs from Násile, Planknars from Kynšperk and the Oderskýs from Lídeřov.

Upon the orders of F.K. Wipplar of Ulschitz, owner of the Vítkov estate, construction of a Baroque mansion at Horní Ves u Vítkova was undertaken in 1713–14 (later to become part of the hospital complex). In 1776 Vikštejn Castle was abandoned for good and quickly fell into ruin.

In 1802 the Vítkov estate was purchased by Emanuel Záviš of Osenice, and in 1875 it was bought up by the Vítkov municipality. A municipal authority had already been established, and the town belonged to the Opava District. 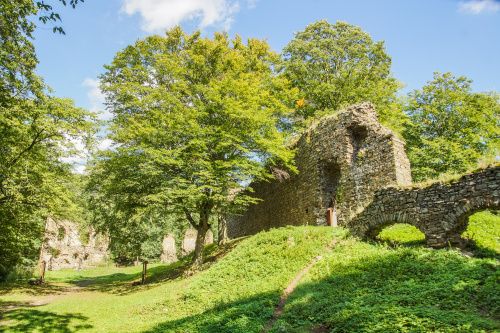 In the mid-19th century several other villages were added to Vítkov.

After 1850, Vítkov became the seat of the district court, and boasted its own gendarme station and tax office. After 1868 the Vítkov judicial district became part of the Opava District.

On 15th October 1891 the railway line Suchdol nad Odrou – Budišov nad Budišovkou, with Vítkov along its route, was officially opened. At the beginning of the 20th century sewerage was installed and the pavements modernised. For the Christmas of 1904, the town was flooded for the first time ever with electric light.

During the inter-war period other important buildings were erected – a gymnasium, cinema and savings bank.

Vítkov was liberated in the closing stages of the Second World War on 4 May 1945, having suffered considerable damage. The southern and eastern side of the square had been destroyed, for example. Citizens of German nationality were expelled and the town was re-inhabited by incoming settlers.